The perfect protein for good health.
Find out why.

Do We Become What We Eat? Please Consider This

Sometimes, you just know something. It's like you know it deep inside. You may not have the science to back it up, but still, you believe. And yet, you'd agree --- having good science to confirm your beliefs is reassuring.

Most of our customer friends believe that eating ethically has positive effects on everything from their physical and mental health, to their community's health, to the health of our planet. They believe that the lives of food-production animals are precious and important. And we agree with them. Very much. 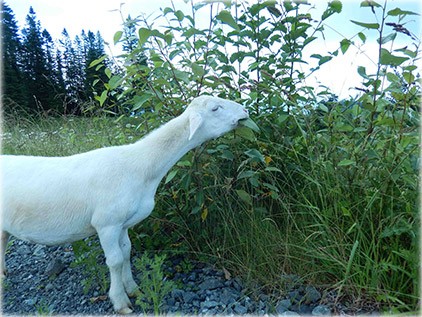 This is one of our lambs, and she's adorable

Today, as I'm writing this, I'm finding there may now be even more science to support the humane treatment of livestock animals. Consider the following:

In 1957, a scientist at the University of Michigan by the name of James McConnell, found that when flatworms were fed tissue from other flatworms that had been trained, their performance was improved by 50% compared to untrained flatworms.

Later, at the Baylor College of Medicine, a neurochemist named Georges Ungar performed similar experiments, but this time with fish. He showed that when tissue extracts from trained fish were fed to untrained fish, the untrained fish acted as if they had been trained. Memories were being transferred between creatures, through what they ate (Chemical Transfer of Learned Fear, Ungar).

Both Ungar and McConnell believed they had discovered "memory molecules" --- RNA molecules which could transfer information between creatures, even penetrating the blood-brain barrier. Their views were revolutionary, and challenged the status quo.

Not surprisingly, Ungar and McConnell came under attack. Funding was cut off. They died. Their research was nearly forgotten --- for thirty years. Scientists were reluctant to touch the subject for fear of persecution.

Recently, however, scientists (funded by the National Institutes of Health and the National Science Foundation) have begun to re-consider the concept of "molecular memory". They've been doing experiments which have confirmed the work of McConnell and Ungar.

Michael Levin at Tufts University is one of those researchers. He has confirmed McConnell's work.

David Glanzman of UCLA is another one. He and his team of neuroscientists reported that they have transferred a memory from one animal to another by transferring its RNA molecules.

RNA molecules are present in the food we eat, and they are not necessarily inert. It turns out that humans can be affected by the RNA molecules found in foods. In fact, scientists have recently discovered that animal origin RNA's are not only bioavailable but also affect gene expression in humans (Gene Regulation by Dietary microRNAs). This discovery is not limited to animal RNA only. Even vegetable RNA can affect human gene expression (What You Eat Affects Your Genes: RNA from Rice Can Survive Digestion and Alter Gene Expression based on this study conducted by Chen-Yu Zhang, a molecular biologist at Nanjing University), even surviving cooking and human stomach acids. More information on this subject can be found here: The Food-Borne Micro RNA and its Controversy on Human Health.

If we piece together the above studies and articles, we can see that RNA molecules from food-production animals are passed into our bodies, and (if Glanzman, Levin, McConnell and Ungar are correct) contain encoded information relating to a portion of the experiences and memories of the animals themselves. This RNA, once we ingest it, can affect our bodies even at the genetic level.

It's natural then to ask the question: Could humans be absorbing the memories and experiences (good or bad) of the livestock animals they are eating?

We won't know the answer to that question anytime soon. But there is enough evidence to convince me that, at least potentially, I could be affected at a deep level, physically and mentally, by the quality of life of the animals that I consume, inheriting their joy or their sadness, depending on how they were raised.

I believe it could. And I think, if you are reading this, you believe it could, too. We know in our hearts that the lives of the animals who die, so that we can live, are precious. We believe that good things will happen when we treat animals with kindness. And now, maybe science is confirming what we believe.

Thank you for believing these things, alongside us. Thank you for supporting local, organic, humane family farms. Together, I think we are making things better.