Our beef is much leaner, and more flavorful. Find out why.

Soil: the wealth of nations

This morning as I'm writing this, I'm looking out over the Sumas flats, an area of farmland that stretches from Abbotsford to Chilliwack. Years ago, these flats were covered with shallow water, which would rise and fall with seasonal flooding. Swampy.

Settlers recognized that if it could be drained, it would make excellent farmland. Over the course of years, the water was pumped out into drainage canals, and today the region is said to be the most agriculturally fertile land in the country. The wilderness was made into a garden. 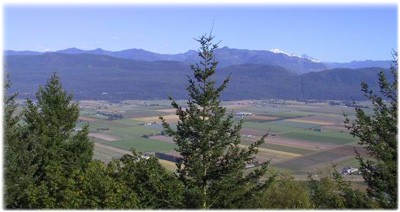 One of the most valuable assets that anyone could own is soil. It's a miraculous factory of life, and it is one of the basic and foundational components of civilization. It is capital. Economists often talk about the capital of a country --- the goods that can be applied to production --- as a component of its wealth. But it seems to me that the fertility of the soil is forgotten.

In nature, things grow and things decay. Life springs up out of the soil, and this growth is balanced by decay.

Yet in today's world of synthetic fertilizers, growth has been accelerated without an equivalent acceleration in decay. Very little is being returned to the soil.

And this is true in industry, as well. Factories, houses, and consumer goods are produced, all of which involve pulling raw materials out of the ground. The pace at which this is happening is not balanced by an equivalent return to the soil of decayed material. The refuse from manufacturing operations and landfills will by no means contribute back to the soil, perhaps for decades, or centuries.

Nor is the sewage from the cities being faithfully returned to the soil.

On conventional farms, deficient soil is being masked with chemicals. Production is measured in terms of yield, where things like weight and appearance factor more highly than nutritional value. The soil is being worn out, left in ruins, and poisoned.

And therefore the capital of the soil, its fertility, is being "spent" --- but is not being replenished. This is at the expense of future generations. People hardly recognize that decapitalization is taking place on a global level, as the soil is stripped and fertility destroyed. The cost of this decapitalization is being pushed onto our descendants. Is this not improvident, spendthrift, immoral?

In economics this is referred to as an "externality" --- a cost of production that is not accurately reflected in the market price of whatever is being produced.

When I was a child, my father said to me "Food is too cheap." I didn't know what he meant at the time, but now I do.

The problem won't be solved with more regulation from the state. It can be solved, though, on a household-by-household basis, especially in our choice of what food we buy.

Our food choices should ensure that the soil's fertility is being improved, not destroyed. In very simple terms, healthy soil leads to healthy crops, which leads to healthy animals, and healthy people.

Buying our food (if not growing it ourselves) from local farmers who we know and trust, is a start. Talking to the farmer, asking questions about their practices. Organic certification is a start, but only a start --- it is a minimum. Buying food from farms that are practicing mixed agriculture (as opposed to monoculture), where off-farm "inputs" are kept to a minimum, where synthetic fertilizers are not used, nor are chemical sprays, nor roundup (organic certification forbids the use of synthetic fertilizers, chemical sprays, and roundup). This is a place to start.

In order for this way of life to take-hold, it requires a different way of thinking, where the well-being of our descendants is foremost. I've heard people say "think globally." But I'm trying to also think multi-generationally.